The Internet of Things, #leweb and other ‘zings’

Last week I was lucky to go to Paris for le web conference, which focused on the Internet of Things (IoT). This describes the shift to a time when all your devices are connected to the Internet, and talk to each other through machine to machine (m2m) communication.

This has been big for a while, although we maybe didn’t notice.

Some of the many examples pitched were fitbit (tracks your activity), withings (connected bathroom scales) and SmartThings, which is a platform for connecting pretty much anything in your house to be controlled by a smartphone app – things like light switches, power sources or even knowing when someone opens your liquor cabinet…

I can see the use cases for some things like the fitbit, but am not entirely convinced that all the examples we saw were that useful (I’m looking at you iPad on a Segway) and seemed to be solutions looking for a problem.

«It’s an iPad on a Segway» More proof that most ideas are conceived while drunk #leweb http://t.co/npd0ocCf

For example, a live demo of showing how you can turn off a light switch in a home on the other side of the world using your phone, whilst a guy in the house looked on felt a bit pointless. The guy could quite easily just have turned the light off himself. I understand that it was a staged demo of the technology, but demo-ing something that’s not useful doesn’t’ really show any use in a product.

I was much more taken behind the idea of Ninja Blocks, which gave you connected objects and also an open API platform to enable you to program them to do whatever you wanted. They call it the API for atoms, which is much less scary than what Brain Solis talked about in his session when he mentioned the future of connectivity being around a Human API (although if you read his explanation of the term, it’s not as scary as it sounds and is a great read).

The story of Lockitron was pretty good too. They were rejected by Kickstarter and so decided to build their own crowdfunding platform, which enabled them to raise the small matter of $2.2 million! The lockitron works by putting the product over your house lock, and you can then use your smartphone to enter your house sans keys, or even allow other people to enter your house (great for Airbnb perhaps). They also released their crowdfunding app as an open source project so other kickstarter rejects can go their own way. Nice work.

And then there was the muse, a connected headband thingy that would monitor your brain waves. So you can control things with your mind, I hear you say? Well, kind of. The example given was of the Le web founder Loic writing an email and the fonts changing based on his brain activity. Changing fonts? Yes, that was my reaction.

Brain controlled fonts is not exactly earth shattering (no word on what brain waves made comic sans), but as this tech evolves it could be one to watch. Still, it has raised over $280,000 on indiegogo. Each to their own.

For some sharp contrast to all the new tech on show, Scott Harrison spoke about his story of founding charity:water. This was predictably brilliant. I’ve talked much about them in the past, so see Scott’s story in the unlikely event you’ve never heard of them. It was definitely good to see some charity involved in the conference, but the fact it was just one made it almost more annoying to see a succession of apps and stories about people making ‘cool’ technology or loads of money and not changing the world.

A speaker highlight who talked about ‘real’ (ish) things amongst all the future gazing was Ramon de Leon, a social media marketer for Domino’s. I suggest you follow him and take a look at the video of his talk, as he’s a pretty entertaining guy and I can’t do his enthusiasm justice in words. But maybe a picture helps. 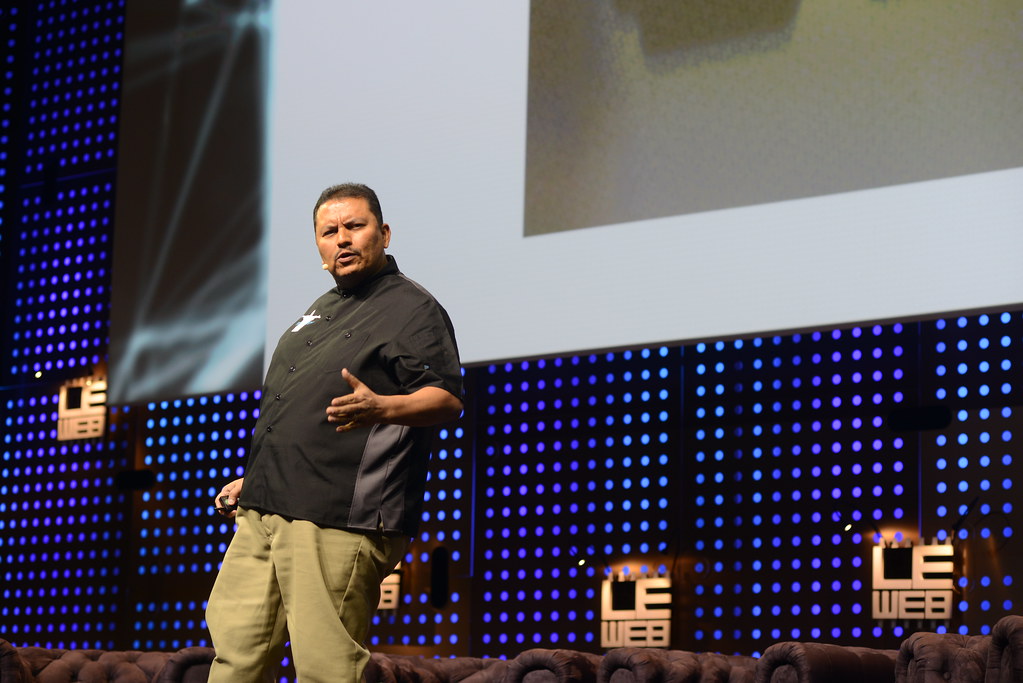 I’ll leave the final word to Henri Seydoux, Founder and CEO of Parrot for adding some humour, common sense, and a quality franglais accent. He said we should be thinking in terms of “Things for the Internet, not the Internet of things”. In true stereotypical French style he then went on an extended simile about comparing “zings” to women, and how the things must be unique, like women, or you’ll get in trouble. But aside from some causal sexism, he was very good at cutting through the BS and where all this can add value.

"The things are like women, they want to be unique, the have to be beautiful, that's like Things for the Internet" – Henri Seydoux #leweb

At one point Loic even mocked him for having a notebook with him on stage, saying that it wasn’t very connected. To which he replied, quick as a flash,

“No it’s not connected, but it’s useful.”

Which seems a good place to end this post. As my colleague Lee said, “people are thinking – what can we do instead of what should we do”. That was my overall impression of all the Internet of things things we saw in Paris. Yes, the tech is undoubtedly impressive, but it’s not useful enough yet. I’m sure that one day it will, possibly fairly soon, and the price of all theses devices will drop so it’ll be easier to reach a mass market, but the killer application has yet to be built (imho). Nor has anyone built a killer IoT app that will change the world and do some good. We best try and make one that does then.

(All the sessions from le web are on YouTube, if any of this has made you want to learn more.)

This site uses Akismet to reduce spam. Learn how your comment data is processed.